Clinical Study Results
Some of the early trial results, such as the 2003 VISX multi-center clinical study, that led to FDA approval for wavefront-guided laser vision correction showed the following:

• At one year after the Custom procedure:

What Is Wave Front Mapping?

Wavefront analyzers use a Hartmann-Shack sensor, which maps both lower and higher-order aberrations by projecting waves of light into a patient’s eye and mapping the waves that bounce back through the pupil. A perfect wavefront would be completely flat. When light rays enter the eye and traverse the different refractive indices, the wavefront surface changes, taking on a History of Wavefront Technology:
Wavefront technology was originally developed for use in astronomy. In the 1900s, an astrophysicist named Johannes Hartmann devised a method of measuring the ray aberrations of mirrors and lenses. The Hartmann test used a metal disk in which regularly spaced holes had been drilled. The disk or screen was then placed over the mirror that was to be tested and a photographic plate was placed near the focus of the mirror. When exposed to light, a perfect 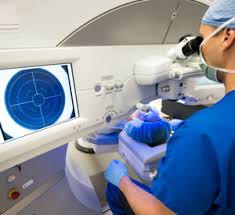 In the 1970s, Dr. Roland Shack and Dr. Ben Platt advanced the concept by replacing the screen with a sensor based on an array of tiny lenslets, thus creating the Hartmann-Shack sensor. In 1978, Dr. Josef Bille of Germany was the first person to use the Hartmann-Shack sensor in ophthalmology. Other wavefront pioneers include Dr. Junzhong Liang and Dr. David Williams who developed a wavefront device that could be used in a clinical setting.

In 1997, Drs. Liang and Williams presented a paper at the Association for Research in Vision and Ophthalmology that discussed the early clinical results attained with the wavefront device. At this time, ophthalmologists and major laser manufacturers, such as VISX, Bausch & Lomb, and Alcon, began to look at the possibilities of wavefront technology for correcting refractive error and to develop their own wavefront analyzers. In 2002, the FDA approved the first wavefront-guided custom LASIK application. Today, there are many integrated wavefront-guided LASIK systems that first generate a wavefront map of a patient’s unique optical imperfections, then send this information to an excimer laser that performs the custom LASIK procedure.

The wavefront analyzer software condenses the wavefront information into a conventional refraction in diopters as well as in Zernike form. This map is then transferred to the laser, enabling treatment of the patient’s lower and higher order aberrations.